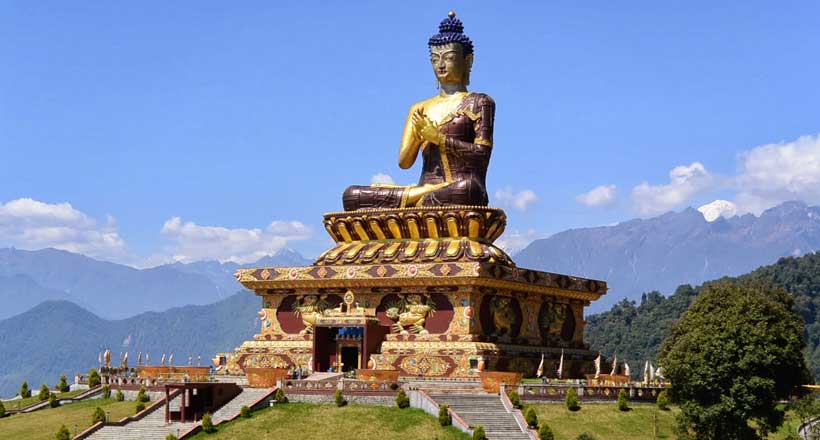 Romance with Mother Nature at Ravangla

Situated in the Southern part of Sikkim, Ravangla or Ravongla is a place which is growing in popularity as a tourist destination every day. Situated at a height of 7000 feet and at a distance of 25 kilometers from Namchi, the South Sikkim capital, Ravangla is a small town that greets and fascinates tourists with its simplicity, serenity and of course the uninterrupted view of the snowy peaks that stand like guards towards the North. Ravangla is uniquely located between Gangtok and Pelling, two prime attractions in Sikkim but is completely different from both, in terms of characteristics. Ravangla is a place where tranquility speaks. The only other sound that one? sears can catch here is that of chirping of different species of birds like Blue-fronted Redstarts, Blue Whistling-thrush, Dark-throated Thrush Grey Bushchats, Green-backed Tit, Verditer Flycatchers and White-browed Fantails. At Ravangla, the day starts very beautifully with the first ray of sun kissing the top of Kanchenjunga, Mt. Pandim, Mt Sinialchu, and Mt Kabru. Watching the snowy peaks changing shades from blue to pink to golden yellow is a real treat for the eyes. There is nothing much to do in Ravangla itself, except buying some souvenirs and essential items from the local market area. However, there are lots of exciting spots within the vicinity of Ravangla and could be reached easily by car. There are two famous monasteries near Ravangla-Bonn and Ralong. Kewzing houses a historic market and there are some mysterious caves in the outskirts of Ravangla. You may also opt for short trekking trips to the nearby Lepcha villages like Yangang, Tinkitam, and Kewzing.

If your aged parents are willing to go out on pilgrimage, you can take them to Namchi since it is a fabulous combination of a pilgrimage and tourist destination.

Buddha Park: Situated very close to the town of Ravenel, the Buddha Park or Tathagata Tsal is the newest attraction in this area. The beautifully designed park features a 130 feet tall sitting statue of Lord Buddha which is visible from quite a long distance. The park is a part of the Rabong Gompa complex.

Temi Tea Garden: Situated close to Namchi, the Temi Tea Garden is a picturesque spot on the lap of Mother Nature. Temi_Tea_Garden_RavanglaTemi is the only tea garden in Sikkim and it offers breathtaking view of the beautiful surroundings, apart from supreme quality tea.

Phur-cha-chu (Hot Springs): Situated on the bank of the beautiful Rangit, the Phur-cha-chu is a hot sulfur spring that attracts both tourists and devotees. The water of the spring is rich in medicinal value and the place has got religious importance since it is believed that saint Padmasambhava had meditated at two sacred caves in the area in the 7th century.

Maenam Hill: At a towering altitude of over 10,000 feet, the Maenam Hill is a breathtaking spot located in between the Ravangla Bazaar and Tendong. If the weather is clear, you can get to see the plains of West Bengal and the India-China border. Maenam is also very popular among trekkers and it could be reached from Ravangla in four hours. From the top of Maenam Hill, you can reach the beautiful Borong village simply by walking.