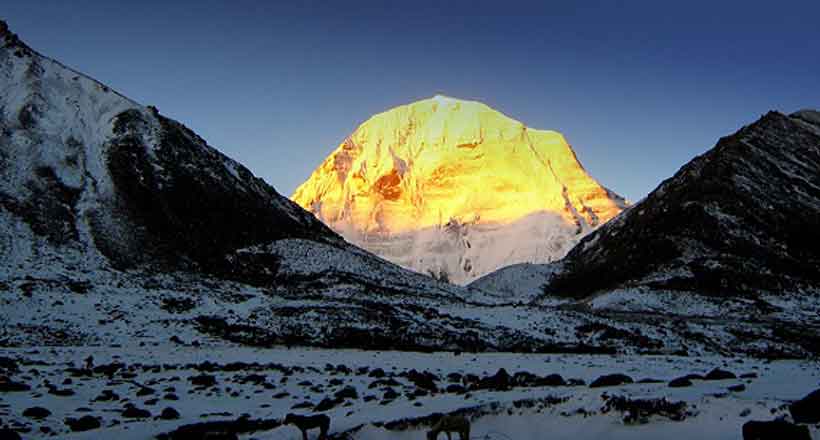 Kailash Manasarovar: The beautiful end of a spiritual journey through Nature

Exploring nature is a wonderful activity that refreshes the mind, but when it comes to mind sometimes surrendering to the magnanimity of Mother Nature brings bigger seclusion. Kailash and Manasarovar are two names that sow the seed of desire among every human mind to witness when they get to know about them. Mount Kailash in the Tibetan Autonomous Region and Manasarovar, the freshwater lake to its North together form a world, which if remained unexplored, leave oneÃ¢â‚¬â„¢s life incomplete, especially if they are explorer or traveler.

Manasarovar, a combination of two Hindi words Mana (the mind) and Sarovar (the lake) is a water body considered as sacred by people of a different religion. Hindus believe the lake actually originated in the mind of Lord Brahma and was then created on Earth. There are similar stories in other religions as well. But that is not the reason why one should be at Kailash Manasarovar. A peak of the Kailash Range with an elevation of 21,778 feet, Mount Kailash is an epitome of natural beauty a glimpse of which leaves one spellbound. The snow-capped peak is also the source of four major rivers in the Asia-the Indus, the Sutlej, the Brahmaputra, and Karnali. But what attracts visitors and pilgrims the most is Manasarovar, the emerald green freshwater lake that flows keeping the peak on its South.

Considered as the abode of Lord Shiva, Kailash Manasarovar is the end point of a lengthy trek journey that travelers start from Kathmandu in Nepal. Though flights from Kathmandu are also available, one should not miss the adventurous journey on feet through the hazardous terrain of the Himalayas. Witnessing the freshwater lake flowing at an altitude of 15,060 feet is indeed a sight to cherish for the rest of your life. The source of the river Sutlej is near Manasarovar and so are the initiating points of the Brahmaputra, Indus, and Ghaghara.

Hotels have emerged at Kailash Manasarovar, but the real fun is spending nights at the tents, as the Tibetan pilgrims do. Here you can walk on the lap of Mother Nature or take a ride on yak or pony.

Our Nepal Specialist Will call you

NatureWings Holidays Limited is a Super Specialty Himalayan Destination Management Company (DMC) formed in 2011 in Kolkata with a clear vision to provide the best solution to the valued guests with their superb knowledge in the territory, hotels, and other allied services. Within a short span of time this Travel Agency in Kolkata, West Bengal has become the most respected and trusted DMC for Bhutan, Arunachal Pradesh, Sikkim, Darjeeling, Silk Route, Sandakphu, Kashmir, Ladakh, North East, Andaman, Sri Lanka, Dubai, Maldives etc.