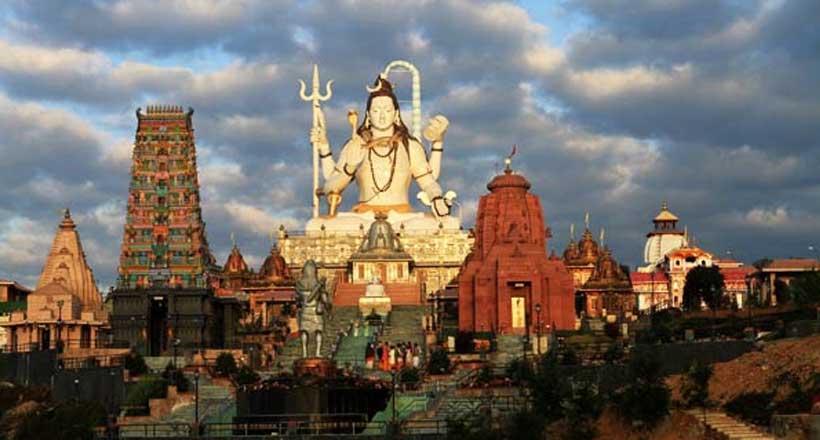 An amazing combination of pilgrimage & tourism

Sikkim, the North-Eastern green princess state of India is simply a land where the scope of exploring Mother Nature is endless. Though for many people, the world of Sikkim is limited to common names like Gangtok, Tsango Lake, Nathula Pass, Baba Mandir and Pelling, the picturesque state is very vast and there hundreds of other stunning destinations. If you have been to Sikkim several times and covered the Easter, Western and Northern part of the state extensively, then focus on the West this time. Arrange a car from Siliguri and head towards Namchi, the capital of West Sikkim. If you are a Bengali, the Bhutia appellation of Namchi would appear very funny since it means Sky High, while in your language Namchi means â€˜getting downâ€™.

Situated in between Melli and Jorethang at an altitude of 5500 feet, Namchi is a picturesque place, though not very serene as many other destinations in Sikkim. Namchi is quite a developed area and the roads, the town, the market area and the school make it evident. But once you cross the town area and start going up climbing the steep terrain you find Mother Nature revealing herself for you. Namchi offers an indescribable view of the Kanchenjungha and the mountains and valleys lying beneath. It seems like reaching the snowy ranges is a matter of minutes from where you stand. Every inch of the road that connects Namchi with Western Sikkim is a viewpoint and you can spend hours standing there, staring at the beauty of the shining pinnacle of snow. Being a high altitude place, Namchi offers a cold feeling throughout the year but its scenic beauty is fast changing the South Sikkim capital into a tourist hotspot

Location & How to Reach: You can reach Namchi from Siliguri/NJP.


Hotels & accommodations: There are numerous private hotels of different budgets in Namchi. Dining facilities are available in most of the hotels. You would also find roadside eateries selling local dishes in Namchi.

If your aged parents are willing to go out on pilgrimage, you can take them to Namchi since it is a fabulous combination of a pilgrimage and tourist destination.

Samdruptse Hill: One of the biggest highlights of Namchi is Samdruptse Hill on the top which sits the patron saint of Sikkim Guru Padmasambhava or Rinpoche, in the form of a 118 feet tall golden statue in the meditation pose. It is the saintâ€™s largest statue in the world. Samdruptse Hill is considered as the Wishing Lake by the Sikkimese and is one of the most sacred places in this part of Sikkim. The upper tier of the statueâ€™s base offers a stunning view of the surroundings, especially Kanchenjungha. While you parents can pray for your good staring at the magnanimous statue, you can take some nice snaps of the surroundings. According to myths, the hill is a dormant volcano and Buddhist monks offer prayers to keep it calm.

Char Dham: Another popular spot around Namchi is the Siddhesvara Dhaam or Char Dham, where you see replicas of four major pilgrimage sites of India. The Char Dham is a unique temple complex that houses smaller replicas of the Jagannath Dham, Dwarika, Rameshwaram and Badrinath. However, what attracts the eyes most here is the 108 feet tall statue of Lord Shiva. The dham stands on the top of Solophok hill and from here you can see the statue of Rinpoche on the mountain standing opposite to it.

Sai Temple & Namchi Helipad: From here you can move to Shirdi Sai Baba temple, which is just minutes away. If you are not that big a devotee, then leave your parents at the temple and go ahead for a few more minutes to reach the Namchi helipad. The surprisingly â€˜plainâ€™ land lies at e height of 5000 and from here you can get a panoramic view of Kanchenjungha, parts of Darjeeling and the plains of Bengal. If you are a worshipper of Mother Nature, the Namchi helipad is the ultimate pilgrimage site for you. Sit on the grasslands that lie beyond the concrete pitch of the helipad and stare at the dazzling deity-Kanchenjungha. You will find it very difficult to turn your back and leave the place.

Temi Tea Garden: Though Temi Tea Garden is generally considered as a part of Ravanglaâ€™s sight-seeing package, you can visit the place from Namchi. It is another amazing kingdom of Mother Nature where you can stand amidst a green carpet of tea plants on the hill slopes and experience the indescribable beauty of the snow-capped peaks.

Clothing & Luggage: Travel as light as possible with least minimum clothes, toiletries and other essential commodities & as these areas is cold in winter it is advisable to carry warm woolen clothes, woolen mittens, gloves, cap etc. During the month of Dec to Feb , Namchi is very cold. Please carry heavy woolen garments during winter.